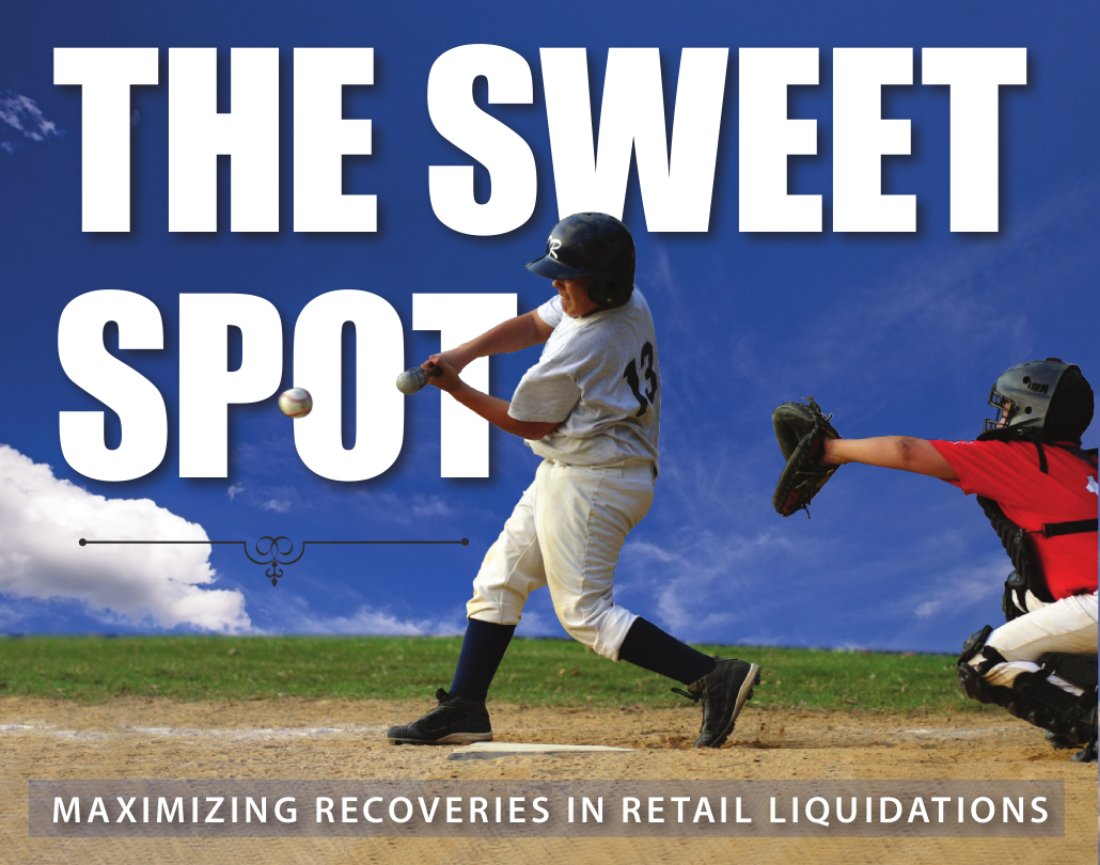 Baseball players often wax poetic about the “sweet spot”: that point where the bat’s barrel meets the ball and the result is a perfectly struck shot rising gloriously away from the batter’s box. You don’t need to watch it. Flip the bat to the batboy and start your trot; you know the ball’s gone. Liquidators also speak of the sweet spot—that point in a disposition where the gross recovery, sale term and multiplier intersect to result in the optimal return. Known collectively as a sale’s “capacity,” the harmony of these three variables is the sweet spot all liquidators target in order to achieve the highest possible recovery values.

The first two elements of capacity are relatively easy to define. “Gross recovery” is simply the top line revenue the venture is forecasted to bring in. In other words, gross recovery is the aggregate of cash and credit card transactions that rang through the registers during the sale term. Often expressed as a percent of the cost value of the inventory, a 100% gross cost recovery means the merchandise sold to customers for an amount equal to inventory at cost. Gross recovery can also be viewed as a percent of the inventory at retail. A 65% gross retail recovery means the merchandise sold at an average discount of 35% off the retail price. Note, the gross retail recovery percent is the equivalent of one hundred minus the sale’s blended average discount.

The second element, the sale term, refers to the number of store days in the sale. Keep in mind, very few closing events run all stores for the same number of days. While the disposition usually starts on the same date for all locations, better stores may run longer closing sales, while poorer-performing sites can be shuttered early, transferring some of their inventory to the better stores to save expense dollars. It’s important to remember that each individual store should pull comparable data only from last year’s matching period.

The multiplier is the last contributor to the capacity metric and is invariably the least understood. In its simplest form, the multiplier reflects the comparable sales the disposition is projected to have versus the same period last year. It is typically expressed numerically to the hundredths place – a liquidation that is forecasted to achieve 140% of last year’s sales is said to have a 1.40 multiple. Liquidators compare projected multipliers to actual results from past dispositions to test for veracity.

In order to generate the maximum return and maintain the viability of the model, all three of the above capacity metrics must be in balance. For example, if the gross recovery seems on target and the sale term is within reason but the result is an unreachable multiplier, then either the gross recovery is too high, the sale term is too short, or some combination thereof. Two of the variables must be tweaked to bring the third in line.

Things get hairy when considering the various factors that can affect the multiplier. Seasonality, inventory type, sale term, store accessibility, and loyalty programs are just some of the variables that can skew multipliers.

Not surprisingly, peak sales periods for most retailers typically occur in the weeks leading up to Christmas. Since multipliers tend to have an indirect relationship with a retailer’s seasonal sales volume, the lowest achievable multipliers can usually be found in sales commencing in November running through December. This is not to say these sales volumes are low. On the contrary, these are normally the highest capacity periods of a disposition. The low holiday period multiplier signifies the difficulty liquidators face when attempting to significantly increase sales velocity during an already busy time. The converse is also true. January multipliers tend to be the highest of any period during the year as last year’s sales are usually low and liquidation events can drive much higher traffic into stores.

Multipliers also differ by industry. For instance, jewelry markups and unit prices tend to far outpace other retail categories. As a result, it is not uncommon to see jewelry disposition multipliers of 3.00 and greater depending on the time of the year. Supermarkets, on the other hand, tend to drive multiples closer to 1.00 or less, as maintaining sales volume is more challenging in this industry when mix and offerings rapidly deteriorate over the course of the sale term.

As mentioned above, the length of a disposition’s sale term, an element that is often highly-regulated by local ordinance, also affects the multiplier. Longer-running terms are likely to have lower multipliers as the excitement generated by an event tends to wane over time. Shorter sales typically drive higher multiples, capturing the circus atmosphere before it fades.

Where a store is located has a role to play as well. For example, external banners and signwalkers can be effective tools for driving volume to strip malls, lifestyle centers, and freestanding sites, resulting in higher potential multiples. Mall-based stores, however, have traditionally been tougher to reach with advertising, since pushing traffic to these units is often limited to the shoppers already in the malls, usually resulting in lower multipliers.

An often-undervalued element that can dramatically increase a multiplier is an active-capture customer list, preferably in electronic form. Loyalty programs, opt-in email, and text or social media programs can bolster the effectiveness of advertising, thereby pushing the multiplier up.

When one of the trifecta outperforms expectations, it’s like a baseball team having too much pitching; it’s a good problem to have. Ultimately, all three capacity concepts: gross recovery, sale term, and multiplier require constant management during a sale to achieve the highest possible return. Capacity is a function of many variables and their interactions. When determining how much to actually bid for a liquidation project, formulating these complex elements into a model is often the source of the most heated discussions.